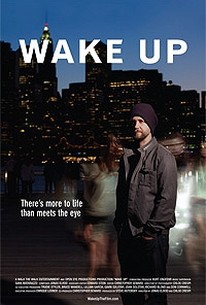 Jonas Elrod was a 37-year-old filmmaker who enjoyed a successful career shooting commercials, music videos, and documentaries when one day, while planning his next day's shooting schedule in a San Francisco hotel room, he began to see visions. Since that day, Elrod says he sees ghosts, demons, angels, colorful clouds of energy, and personal auras wherever he goes, and he can't explain what is happening to him or why. Elrod and his girlfriend began looking for a reason for this phenomenon, and visited a long series of doctors, psychiatrists, and spiritual teachers, trying to determine if his visions were the product of an illness, psychosis, or a genuine spiritual apparition, and as the process went on, Elrod found he wasn't certain if his visions were a curse or a blessing. Filmmaker Chloe Crespi (who saw ghosts as a child) began helping Elrod make a film about his experiences and his search for an answer to an almost impossible question, and Wake Up is a documentary about a man chasing a mystery and looking for answers within and outside himself. Wake Up was an official selection at the 2009 South by Southwest Film Festival.

Critic Reviews for Wake Up

Audience Reviews for Wake Up

There are no featured audience reviews for Wake Up at this time.