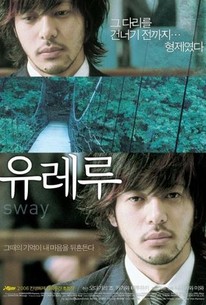 A murder investigation reveals a deep-rooted sibling rivalry in director Miwa Nishikawa's brooding family drama. On the one-year anniversary of his mother's death, Tokyo art and fashion photographer Takeru (Joe Odagiri) returns to his small hometown in order to pay his respects. But all is not well back home, and when Takeru's authoritative father questions his sincerity, the frustrated son strikes back with accusations of violent conduct. Though the situation is initially diffused by Takeru's older brother Moniru (Teruyuki Kagawa), who stayed behind to run the family business, tensions once again start to run high when Tekeru, Moniru, and pretty childhood friend Cheiko (Yoko Maki) decide to celebrate their reunion by taking a hike in the wilderness. Tragedy strikes, however, when Takeru wanders off to photograph the landscape while Minoru and Cheiko get into a heated argument on a suspension bridge. After rejecting Minoru's advances, Cheiko falls to her death. Takeru saw nothing, and though Minoru claims responsibility for Cheiko's death the authorities still launch a full investigation. With the evidence against Minoru mounting, it quickly becomes apparent that the older sibling is deeply resentful of the fact that he was forced to remain at home with his overbearing father as Takeru departed for Tokyo and began living the good life. Cheiko's rejection was simply the last straw for Minoru, who subsequently rejects his brother's help and places himself at the mercy of the powers that be. ~ Jason Buchanan, Rovi