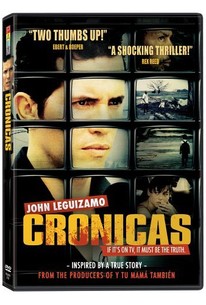 An unsettling and absorbing cautionary tale with John Leguizamo playing an unscrupulous TV reporter who uses the medium to further his own goals.

A man with a secret forms an uneasy alliance with an opportunistic reporter in this drama from Mexico. Manolo Bonilla (John Leguizamo) is a broadcast journalist for a Latin-American tabloid television series who has been sent to Ecuador to cover the funeral services of three children who fell victim to a mass murderer known as "the Monster of Babahoyo." Shortly after Bonilla finishes interviewing a young mourner, the child is struck by a car driven by Vinicio Cepeda (Damián Alcázar), a traveling salesman who pedals bibles. The crowd assembled to pay their respects flies into a rage, pulling Cepeda from his car and nearly killing him. Bonilla's intervention ends up saving Cepeda's life, but the reporter is ashamed to admit that he and his cameraman didn't break through the crowd to save the driver, but in hopes of getting a better shot of those beating him. Cepeda is jailed for manslaughter, and when Bonilla visits him behind bars, he shares some unexpected news with the reporter -- he claims to know the identity of "the Monster of Babahoyo," and also knows where the killer has buried other victims. Cepeda is willing to share this information if Bonilla can help get him out of jail, but instead of handing the information to the police, Bonilla decides to investigate himself, certain that another scoop on the case will boost his ratings and his career. Crónicas was screened as part of the "Un Certain Regard" series at the 2004 Cannes Film Festival. ~ Mark Deming, Rovi