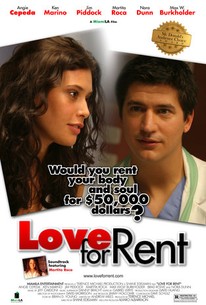 A Colombian law student living in Los Angeles and recently threatened with deportation enters into an unusual agreement with an eccentric couple in hopes of maintaining her citizenship and earning her degree in actor-turned-director Shane Edelman's affectionate romantic comedy. Sofia (Angie Cepeda) once had big plans for her life, but lately it seems like everything is falling apart. Her debts steadily growing and her future in the U.S. thrown into question when the man she had married as a means of obtaining her Green Card cruelly steals all of her possessions while threatening her with divorce, Sofia's sole joy in life is the time spent with her precocious six-year-old neighbor Max (Max Wolf Burkholder), a lonesome boy whose parents have always been too busy to provide him with the attention he so desperately needs. When a series of comic coincidences lead Sofia into the company of wealthy eccentrics Frank (Jim Piddock) and Helen Bauman (Nora Dunn), she soon discovers that she may have found the answer to all of her problems. Saddened by their inability to bear children but determined to realize their dream of parenthood at any cost, Frank and Helen offer Sofia 50,000 dollars if she will agree to become a surrogate mother for the pair. Her outspoken cousin Monica (Martita Roca) and Monica's husband George (Richard Speight, Jr.) providing just the support needed to help her successfully deal with both her pregnancy and the increasingly strange demands placed on her by the Baumans in hopes of birthing a healthy baby, Sofia soon begins to feel an increasing closeness with her kindly doctor Neil (Ken Marino). Though her feelings are seemingly reciprocated at first, it soon becomes increasingly obvious that something in Neil's personal life is preventing him from developing a romantic bond with his adoring patient. Determined to face her labor and forge ahead despite her seemingly unending string of personal disappointments, Sofie strives to find the power to regain control of her life during a time when all hope seems lost and she appears to have no one to turn to.

Max Burkholder
as Max
View All

There are no featured audience reviews for Amor en Alquiler at this time.