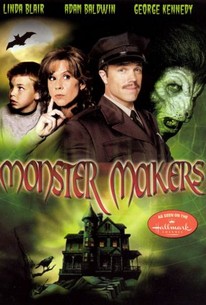 A long-lost fright flick with the power to unleash the silver screen's greatest terrors threatens to turn the ghouls loose once again after being re-discovered by a curious young monster fanatic in director David S. Cass' heartfelt tribute to 1950's-era sci-fi and horror films. Ageing film director Dexter Brisbane (George Kennedy) has witnessed firsthand the power that his film "Monsters on the Loose" truly has, and after seeing his celluliod horrors take human form when the film was first released, he hid it in his attic and vowed never to screen it again. When the ailing Dexter hires Shelley Stoker (Linda Blair) to be his personal nurse and Shelley's son Tim (Tim McCallum) makes the discovery of a lifetime, it's only a matter of time before "living-ghost" Revenant, malevolent store-front dummy Manikin, and toothy were-rat Vermin leap from the screen to torment the living once again. Thankfully the bad guys aren't the only ones with the power to make the leap from fantasy to reality, and with a little help from screen sheriff Jay Forrest (Adam Baldwin), young Tim and his friends may be able to ensure that this screening of "Monsters on the Loose" doesn't go from limited run to extended engagement.

Stephen Bridgewater
as Off. Justin Cole

Tim Considine
as Verman
View All

There are no critic reviews yet for Monster Makers. Keep checking Rotten Tomatoes for updates!

There are no featured audience reviews for Monster Makers at this time.