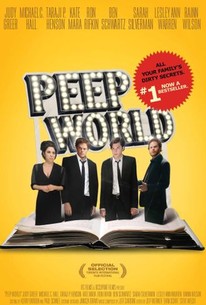 What happens to a rich, neurotic family when one of their own writes a tell-all exposing their dirty secrets? The Meyerwitz family is about to find out. And the timing couldn't be more hilariously awful. As the Meyerwitz clan prepares for the 70th birthday of nasty family patriarch HENRY (Ron Rifkin), PEEP WORLD, the expose written by youngest son NATHAN (Ben Schwartz) has gone red hot, making a mess of all of their lives. JACK (Michael C. Hall), the oldest son, is failing in his career and now has to bend over backwards to convince his wife LAURA (Judy Greer) that certain, ahem, salacious events in Nathan's book weren't really committed by him. Sister CHERI (Sarah Silverman), a drama queen and struggling actress, can see the PEEP WORLD movie set from her window, and grows increasingly enraged watching a more successful actress play a horribly unflattering version of her. Her solution: sue her younger brother for libel. Meanwhile, black sheep JOEL (Rainn Wilson), a disaster in slow-motion, plots to turn his life around at his family's expense, and MARILYN (Lesley Ann Warren), the children's mother, long-divorced from Henry, still carries a torch for her ex, one that's only inflamed further by the revelations in PEEP WORLD. For his part, the now-famous Nathan cluelessly wonders what the fuss is all about and basks in his success much to the annoyance of all around him. Over the course of 24 hours, this group of likable and unlikable misfits will summon their courage to come together for the "family dinner" they'll never forget. -- (C) IFC Films

Lewis Black
as Narrator, The Narrator
View All