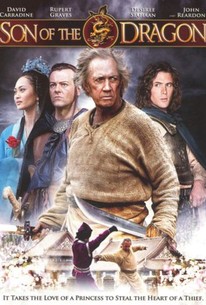 Son of the Dragon

A small time con artist and his loyal companion must fight to prove their innocent when they are accused of attempting to poison a princess in this adventure mini-series directed by David Wu (The Bride with White Hair) and starring David Carradine. D.B. (John Reardon) was abandoned at birth on the docks of Shanghai, but while most children never would have survived that traumatic start David was rescued from certain death and soon forged a close bond with the resourceful Bird (Carradine). As D.B. grew into a young man, Bird became his constant companion. It always seemed like there was no jam that D.B. and Bird couldn't eventually work their way out of, and when it came to swindling this cunning pair were always at the top of their game. Neither D.B. nor Bird would have ever imagined that one of their brash schemes that would ultimately change the course of their entire lives, yet a daring mission to steal the royal court's jewels did precisely that. Upon carrying out the potentially profitable but highly dangerous mission, D.B. fell desperately in love with the stunning princess Li Wei (Desiree Siahaan). Though his affections were indeed reciprocated, it began to look like their love was doomed as the princess' father attempted to find her a more suitable husband. The princess, however, thwarted this plan by challenging her suitors to a series of arduous and impossible tests ostensibly staged to prove their love for her. When the nefarious Prince of the North (Rupert Graves) frames D.B. and Bird for attempting to murder the princess and sentences them to death, the wily companions rightly begin to surmise that they may have finally gotten themselves into a jam from which there is no escape.

Rupert Graves
as Prince of the North

Nitin Ganatra
as Prince of India
View All

Critic Reviews for Son of the Dragon

There are no critic reviews yet for Son of the Dragon. Keep checking Rotten Tomatoes for updates!

Audience Reviews for Son of the Dragon

There are no featured audience reviews for Son of the Dragon at this time.

Son of the Dragon Quotes