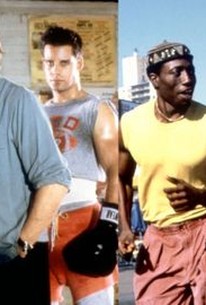 Klaus Maria Brandauer stars in this drama as Alek Neuman, a one-time boxing champion in the Soviet Union. While he was one of the top-ranked Russian fighters of his day, he was never allowed to box in the Olympics, because the Soviets would not permit Jews to compete on their national teams. Many years later, an elderly Alek is able to emigrate to the United States; he settles in the Brighton Beach section of Brooklyn, New York, where he makes ends meet as a dishwasher. Alek is depressed and starts sinking into alcoholism until he meets Timmy Boyle (Adrian Pasdar) and Roland Jenkins (Wesley Snipes), two up-and-coming amateur boxers. Alek thinks that the two young fighters have potential, and he offers to coach them. While Timmy and Roland aren't sure at first if they trust Alek (or each other), in time they grow to respect each other, and it looks as if they may make the United States Olympic team -- where they may fight against the Russian team that wouldn't accept Alek years before. Brandauer won critical acclaim for his performance in Streets of Gold, which also featured Wesley Snipes several years before his breakthrough role in Spike Lee's Mo' Better Blues.

Paul Herman
as Patron at Gennaro's

Gene Lebell
as Referee at Arena

Thomas Mendola
as Neighbors at Tenement

Frank Patton
as Policeman at Tenement

Jack Wilkes
as Policeman at Elena Attack
View All

News & Interviews for Streets of Gold

What The Hell Happened To Wesley Snipes?
View All

Critic Reviews for Streets of Gold

Audience Reviews for Streets of Gold

There are no featured audience reviews for Streets of Gold at this time.