The Tale of Despereaux 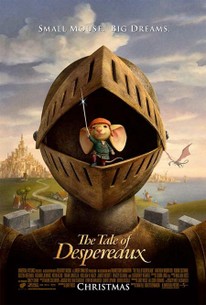 The Tale of Despereaux

Despite its striking visuals, The Tale of Despereaux as a story feels familiar and unimaginative.

The Tale of Despereaux Photos

"The Tale of Despereaux" tells the story of several unlikely heroes: Despereaux, a brave mouse banished to the dungeon for speaking with a human; Roscuro, a good-hearted rat who loves light and soup, but is exiled to darkness; Pea, a Princess in a gloomy castle who is prisoner to her father's grief; and Mig, a servant girl who longs to be a Princess, but is forced to serve the jailer. Tiny and graced with oversized ears, Despereaux was born too big for his little world. Refusing to live his life cowering, he befriends a Princess named Pea and learns to read (rather than eat) books--reveling in stories of knights, dragons and fair maidens. Banished from Mouseworld for being more man than mouse, Despereaux is rescued by another outcast, Roscuro, who also wants to hear the tales. But when the Princess dismisses Roscuro's friendship, he becomes the ultimate rat and plots revenge with fellow outsider Mig. After Pea is kidnapped, Despereaux discovers he is the only one who can rescue her--and that even the tiniest mouse can find the courage of a knight in shining armor. In this tale of bravery, forgiveness and redemption, one small creature will teach a kingdom that it takes only a little light to show the truth: what you look like doesn't equal what you are.

Sigourney Weaver
as Narrator, The Narrator

News & Interviews for The Tale of Despereaux

Critic Reviews for The Tale of Despereaux

Audience Reviews for The Tale of Despereaux

The Tale of Despereaux Quotes